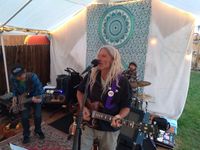 Groovespeak at one of our favorite outdoor gigs

Carey is a founding member and driving force behind the band GROOVESPEAK of Leadville Colorado, which has been rocking the mountains since 2003. He also plays solo acoustic gigs including the Tennessee Pass Cookhouse, apres ski, and weddings. Carey and founding partner Brian Woodward write songs and are working on a new album (or two). Carey started his music career touring the southeast playing with groups such as: The Fringe, Psilly Psyche Band, The Spores, Planet Earth, Shot, and Group W. He has opened for The Grapes, the Black Crowes, and Col. Bruce Hampton, Shakedown Street, Jeff Francis, and Barefoot Truth. His first CD, Planet Earth-The Circle includes Grammy award winner Derek Trucks on the title cut. Carey first played in Colorado in 1991 with PPB, then 2 Miles High and the Cloud City Fatties. "Music is a gift from the Universe, the spirits, the power, the mystery. Music is the greatest gift I have been given. Music is Love. The only way for music and love to exist is to pass it on. Then it will live forever and the circle can be complete." - Carey Nall

“ Because you are only as good as what surrounds you, I would like to give thanks and space here to credit all the various musicians who have played with me over the years. Here are the line-ups: